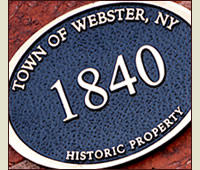 Frustrated by the limitations in available means to reproduce patent documents, Chester Carlson set out to find a viable alternative. His research in to the little know properties of photoconductivity led to the creation of the world's first electrophotograph in 1939.

Unfortunately few saw much merit in Carlson's discoveries. It wasn't until 1944 that a suitable development partner was found. With the aid of the Battelle Memorial Institute and eventually the Haloid co. the first viable commercial copier product was released in 1949. In 1959 with the release of the 914 Xerox copier, Haloid finally started to see success with their new technology. Sales of the 914 increased rapidly. Soon after, the company changed its name to XEROX and began construction of a large facility in the quiet little town of Webster, New York.

For the complete story, read XEROX's The Story of Xerography (.pdf).

Examples of XEROX Logos over the years.